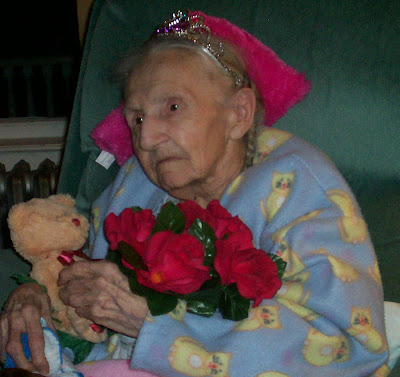 Can you imagine the changes in history that Wilhelmina Greene Henley has seen. Born on November 10th, 1907, she has lived through World War I through the present day war and just imagine the changes in innovation and inventions not to mention changes in society. Fondly known as “Willie” by many Guilford residents, she was a teacher in Guilford Central School and later in the Bainbridge –Guilford elementary school in Guilford. She retired in 1972.
Willie graduated from Oneonta Normal School and obtained her teaching degree from Albany while teaching in Troy, NY. On July 31, 1933, in a small chapel in Los Angeles, California, Miss Greene married Raymond H. Henley. They came back to reside on Main Street in Guilford where Willie had moved with her parents when she was 9 years old.
In 2003 Wilhelmina and Raymond Henley celebrated their 70th anniversary of marriage. As a special request, the Guilford town board made a special proclamation to honor Ray and Wilhelmina’s 70th wedding anniversary. Ray had been employed in the engineering field with several local businesses, retiring from what was General Laboratory Associates (GLA), now Unison. The G.L.A. company began in Guilford and Ray was one of the early engineers of that company. He retired in 1968. Ray sadly passed away a little over a year after their anniversary in November of 2004.
Thanks to Willie’s caretakers and friends a 101st birthday celebration took place at her home on Monday night, November 10th. It was a wonderful evening and Wilhelmina Henley was amazed at the number of people who came to help her celebrate her 101st birthday.
Willie has been a great source of information on the early 1900’s history of Guilford. She has told us of some of the memories she has of some of the people, including her parents that lived here in the 1890’s through the 1900’s and shared photos and scrapbooks. She let us record her on a cassette recorder going up and down all the streets and told us who she could remember living in each house. She has been a great asset to the historical society and we wish her 100 more years!!