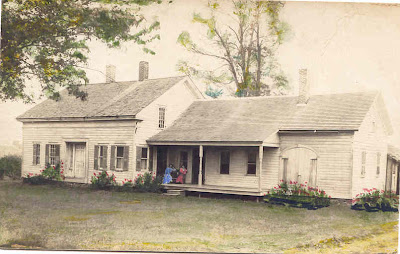 Thomas McLagan Home-Look on map to the very top. One map lists McLane, not McLagan.

Any one who has done ancestry research has at least one mystery. Try doing a whole township with 8 hamlets. One of the GHS projects is called the “Housing Project, Then and Now”. It is an ongoing project and may never be completed but we do have a great start. Genealogy is a help in some cases. Deeds definitely add the the pool. Wills sometimes contribute and maps help the most. Word of mouth and written documents including those small items in the newspaper can also help.

However, even with these resources it is easy to get stuck. Do we really have proof that a house was built when the land was purchased and/or was there an existing house on the property at the time the deed was signed? Also, if there was a structure, is it the same one. Fires destroyed many homes and then they were rebuilt. Another resource, as part of the project helps greatly, and that is an early photograph. At least this gives us an idea especially if we know what year the photo was taken and/or who is in it. We also know that many homes were not rebuilt after a disastrous fire and now the land lies vacant. Putting in a new road, like Rt. 35, also took homes and structures which one house was moved up to Gospel Hill Road. Anyway we need those photos to help in our research. Please let us know if you have any we can scan.

Now back to the maps. 1855, 1863, and 1875 maps show names of people who owned the land. There are also schools, cemeteries, churches and some businesses on these maps. We have found that not all the names of folks appear at that particular time the map was finally published, but it still is a great resource.